Escape from the Industrial Canal

With 2.5 years of New Orleans’ Industrial Canal trauma clinging to her hull, the Shanti finally made her maiden voyage Saturday, January 18, 2020. We’d hoped to leave before the end of 2019. It felt like there was a curse in need of breaking and that it wouldn’t be undone unless we found a new port before the new year. Alas, our first effort ended before it began with a leaky transmission.

After that initial failure to launch, I did what I always do. I readjusted my perspective and made ready to cope with another month of the same. Maybe more.

I held up my optimism for a while, but as the old year turned into the new, I began to feel defeated.

Then, there were problems as there so often are. Not big problems like 2019. But after 2.5 years, even small problems start to feel like big problems. Spilled coffee is enough to do me in at this level of cosmic exhaustion, and that was the final straw on the day that we made the decision to just go.

I was sitting in the dark video poker room, mulling over a morning of bad tidings when I knocked over my cup of coffee. I went into an immediate spiral and decided to call it a day. Back at the Shanti, I cried to Jack, and then he wondered aloud if we should just plan on staying another two months for the purposes of work. He had an opportunity to get on with a boatyard, but only if we stayed longer.

What you have to know about me is that I do not normally lose my cool. I’m a master of emotional control. Normally. But I was at wit’s end. I’d begun to feel like I was trapped in a Twilight Zone nightmare, that we’d never be able to leave the Canal. That maybe we were already dead and in Purgatory. I’m not even kidding.

So now I’m howling because I feel like this is evidence in support of my outlandish theory. We are never leaving, and that’s what I was howling.

“We’re never getting out of here!”

It was pretty pitiful, and Jack was immediately aware that I had long since overstayed my capacity for staying. He promptly took back the proposal and said, “Let’s go this weekend. It’ll be sunny on Saturday. Call Stephanie and make sure we can squeeze onto her dock.”

That was on Tuesday or Wednesday, and Saturday morning we were off.

Another shot of putting NOLA behind us – with pelicans this time! In our family, we’ve taken to calling pelicans pterodactyls because that’s what they remind me of in flight overhead. ❤️

I think we would never have been prepared for that first passage even if we were prepared. Leaving the marina that we’d called home (even if it felt sometimes like home in hell) was still terrifying and stressful and complete chaos on some level.

But the passage was smooth. Few boats were out because the initial forecasts for the day called for storms. The skies cleared up just for us, and we were escorted by pelicans the entire way across Lake Pontchartrain. I was on the verge of giddy tears the entire time. The horizon! The freedom! The daring escape!

Captain Jack in the captain’s hat my mom @dotbcrisp picked up for him at Spencer’s Gifts. Yes. They still exist. No one was more surprised than me. ?

We arrived safely after navigating a lake, a couple of bridges, and even a canal system. It was lovely to have a friend waiting for us, but I could’ve kept on like that for days. I loved every minute of it.

Dante keeping a weather eye on the horizon. #boatcat

It’s taken me so long to write a post because once we tied up, the enormity of what we’d done hit me. It’s not just that we up and moved; it’s that we up and moved with no real plan. Not because we’re completely foolhardy, but because the new lifestyle that we’ve been building towards all along requires flexibility.

I feel like I’m experiencing that “fog of war” common to video games. I can see only so far because there are several factors that cloud my foresight. The next passage will depend on weather, finances, work, wifi requirements, and dozens of other unknowns.

The truth is life is always like that, but it’s not always so obvious. It becomes much more obvious when you’re self-employed, homeschooling, and living aboard a renovation project. You become more aware of the precarious state of existence, but you also develop pretty rad skills for navigating the chaos and even taking advantage of it.

For now, we’re here, and we’re safe. Better still, the leap of faith has been rewarded with a metric tonne of unanticipated client work. Also, it’s led to the discovery that several generous friends have docks along our route, which will help to reduce our travel costs and offer us some much needed community. We were isolated out at the New Orleans marina, and we’re enjoying quality time with friends.

That’s it for now. I’ll try to write more this week about our loosey goosey plans and also about a couple of valuable lessons I’m taking away from our time in the Industrial Canal. Until then, let me leave you with a passage from Sterling Hayden’s Wanderer. It’s been an inspiration to both Jack and me.

To be truly challenging, a voyage, like a life, must rest on a firm foundation of financial unrest. Otherwise, you are doomed to a routine traverse, the kind known to yachtsmen who play with their boats at sea… “cruising” it is called. Voyaging belongs to seamen, and to the wanderers of the world who cannot, or will not, fit in. If you are contemplating a voyage and you have the means, abandon the venture until your fortunes change. Only then will you know what the sea is all about.

“I’ve always wanted to sail to the south seas, but I can’t afford it.” What these men can’t afford is not to go. They are enmeshed in the cancerous discipline of “security.” And in the worship of security we fling our lives beneath the wheels of routine – and before we know it our lives are gone.

What does a man need – really need? A few pounds of food each day, heat and shelter, six feet to lie down in – and some form of working activity that will yield a sense of accomplishment. That’s all – in the material sense, and we know it. But we are brainwashed by our economic system until we end up in a tomb beneath a pyramid of time payments, mortgages, preposterous gadgetry, playthings that divert our attention for the sheer idiocy of the charade.

The years thunder by, The dreams of youth grow dim where they lie caked in dust on the shelves of patience. Before we know it, the tomb is sealed. 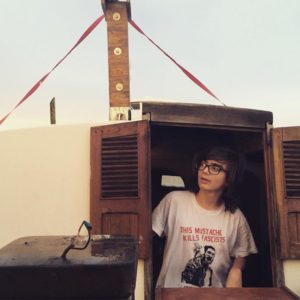